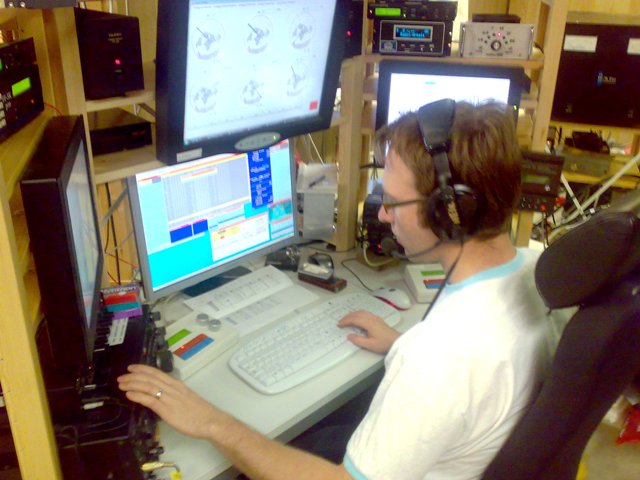 OH8X is located in far north where ms. Aurora are taking care of us. Despite of that Arcala Extreme mission is to challenge well known north-south winning theory.

During 2008 a lot of things has changed in Radio Arcala. Huge amount of things has been trimmed with new technology innovations to get usability of  this very complex environment to high competitive level. A lot of rework and redesign has been made based on deep analyzes based on all  gathered data and measurements from earlier OH8X architechtural phases. Huge amount of  cross science competencies has been needed to make this one of the  most impressive station to alive. You can see some more information from http://www.radioarkala.com/
(Those who are waiting to read more information about 160 and 80 super antennas, no I dind’t use them yet :))

I am happy to say that technically whole CQ WW SSB 2008 operation was a succee. No fatal failures and all different layers of this concept worked like a  charm, full 48h!!. Usability for all these superior touch-screen cockpit was excelent and doing full 48h was piece of cake.  This wouldn’t be possible without a huge huge amount of work to get everyting on track.

When starting to desing operating plans and setting goal for year 2008 I went back to year 2000 to break down parts how current OH-record was constructed. There where three major issues that made me worry about:

a) design of new antennas for 160 and 80 are under final adjustment. When looking OH8X location and trying to understand how low band works there you easily understand that in normal conditions you aren’t at competitive edge compared to southern stations. This is bad, because 20m is workhorse from OH8X and you have to make decisions to work low bands because of new rare mults with lower point-rate or upper bands with good US-runs

b&c) If OH8X will fail to achieve propagation on 10/15 there will be huge problems at first because of mults and secondly because nowadays 20m is so full, that during EU-primetime it makes life quite hard there. A pile of stacked stations on same frequency and you don’t need to dream to find rare multipliers if those are loud or answers to your CQ.

After now, I have to say that pre-contest analyzes was something that realized quite well. Low bands were very very hard and you had to work hard.  You didn’t get anything for a free. We had some very heavy storm during weekend including static rain. It made periodical 59+ noise aswell, so no mercy!

What suprised my was excelent (but too short) opening to JA and USA on 15m and some very very short opening to Asia on 10m. At least in OH8, I had some 10min slot  where some asian stations were workable….nothing else.

In overall two hours with more than 220q is not bad in this time of solar cycle, but to get balance I had more than enough very very low rated night-time hours.

I didn’t managed to claim even close to new OH-record, but when looking back what Timo OH1NOA said after CQWW SSB 2000 I think that at least one goal might be possible  to achieve: Timo ran 4536q which is highest single-op qso count from main OH-land and now 8 years later more than that achieved. It will be a huge thrill
when more sunspots appears…you just kind imagine what kind score levels will be achieved generally.

Again, competition in TOP 5 Eu is tight, congrats to ES5TV (huge huge huge effort), DL6FBL@SV9CVY and for G4PIQ@M6T.  What comes to CU2X where Toni exploded the european record to totally new levels…excelent job! It seems that we have still some work to do  to switch north-south theory upside down