Until now, operating a remote-site amplifier or beam rotator typically has involved your logging computer at the operating site. But even here new winds are blowing, so it is reasonable to have an amplifier than can be truly controlled and monitored over the internet using an HTTP approach. Here you should have web-browser-based software on your logging PC that enables the PC to communicate with an amplifier having an IP address, to set and show its operation on a real-time basis.

Radio Arcala jointly undertook with the European OM-Power amplifier manufacturer to work out such a concept the first of its kind. It lets you communicate with the amplifier over the internet and see its functions just as though the amplifier were sitting on your operating table. Here the amplifier is not connected to a local computer as currently is often done through an RS-232 port; rather it is hooked up directly with the internet. Radio Arcala offers the needed open-source software.

Only a few commercial rotators currently fit into the remote-control scheme, although Yaesus DXA series can be an integral part of the radio and therefore can be controlled from the radio itself. While IP-addressed interface boards are just becoming available for standard rotators, all requisite technologies and building blocks are available to allow the remote station to play simply and efficiently. Once again, none of the elements used here suggest that you have to communicate with a PC at the remote site, an issue that typically has been a source of many shortcomings and hassles.

This is how the remote amplifier appears on a local computer screen. With HTTP technology, you can control each function with your mouse, see the actual power and monitoring LEDs, plus receive a stream of messages on amplifier functionality. You need not worry about the amplifier being away where it will not cause noise or interference. 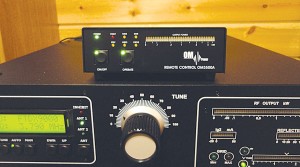 If amplifier noise and heat bother members of the household in a local operation, the small remote unit is all that is needed at the traditional station. The amplifier itself can be placed some 10 meters (30 feet) away from the station, connected over the internet.