Wow, what a weekend it was! Radio Arcala’s engineers allowed a first serious remote contest operation – over the internet – from the CR2X station located 4500 kilometers away from the actual operating position. It was a gas unning those endless U.S. pileups from the Azores while gazing at th

Northern Lights through the window at home 65 degrees north. It presented a new challenge, following the words of Hamlet – to be or not to be (there)?

With ever increasing antenna restrictions and noisier environments, going remote is the most likely way for serious folks to utilize the current technology for the common good. Radio Arcala is in the forefront of pushing for IP address driven station building blocks, such as radios and amps, while our vision is that each station accessory will soon have its own IP facility.

Running the highest continental number of QSOs (4543) in a first serious effort at remote operation shows the potential of the remote concept. There is still room for improvement and, honestly, it has to be said that the world is not ready – but we are one step closer.

These QSOs do not count for DXCC but they do count for the true spirit of Amateur Radio, being in the vanguard of state-of-the-art technology and its applications. 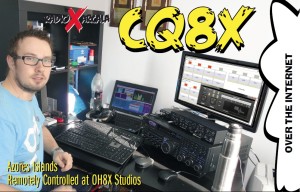